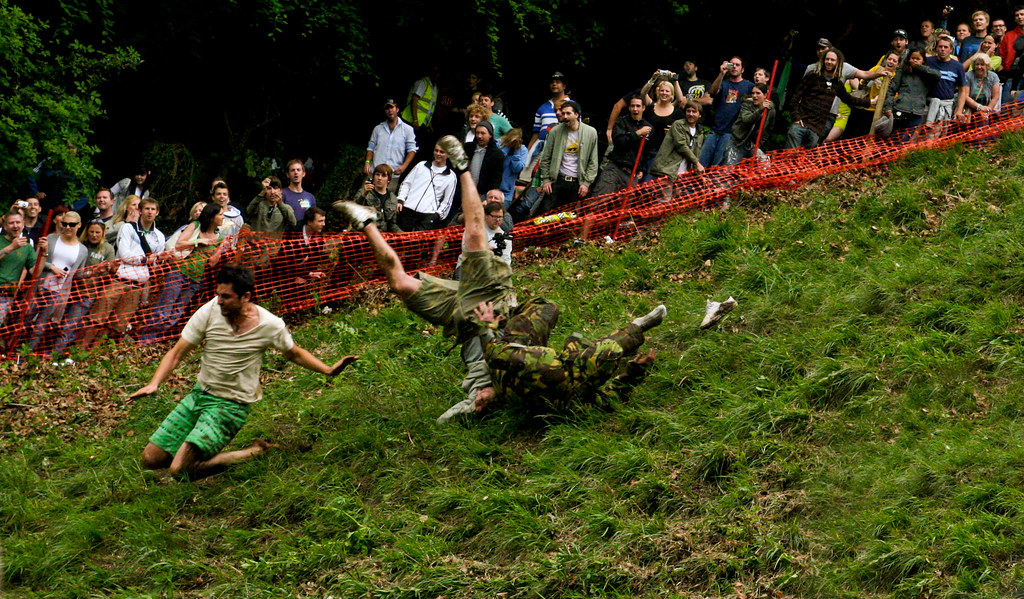 The Cooper’s Hill Cheese-Rolling and Wake is an annual event held on the Spring Bank Holiday at Cooper’s Hill, just over a mile from Brockworth in Gloucestershire, England. It consists of competitors chasing down the hill after a round of Double Gloucester cheese, sent rolling down ahead of them.

The event has taken place for over 200 years although its exact origin isn’t known.  It was originally held just for the local villagers.  Today, people from all over the world converge on Brockworth, each year to take part. Traditionally there are five downhill races, four for men and one for women. Sometimes a safer uphill children’s race takes place.  Each race may have between 20-40 participants. Cooper Hill is 200 yards long with a 50% gradient and the 8lbs round of cheese is released one second before the participants.  They then race, fling, hurl, tumble, fall or by whatever means possible in pursuit of the cheese.  Nobody ever catches the cheese, with it reaching speeds of 70mph.  The winner of each race is simply the first to cross the line at the bottom and receives a wheel of Double Gloucester cheese as their prize. Injuries are an inevitable consequence of the race, sometimes serious, although no deaths have been reported. In recent years it has run on an unofficial basis and thousands of spectators continue to attend.  The event was again cancelled in 2020 and 2021 due to Covid-19 restrictions.